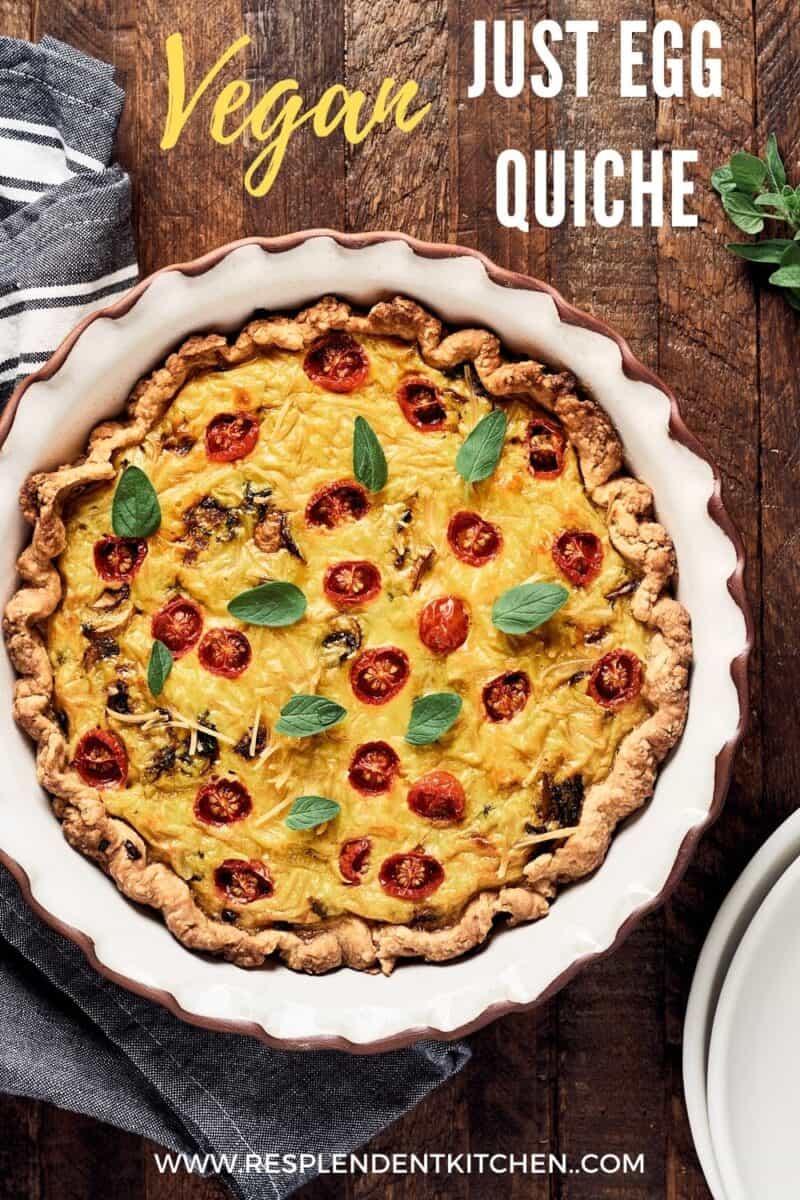 Do you love quiche but don't eat eggs? Or maybe you're looking for a vegan-friendly dish to take to your next potluck? Either way, this vegan JUST egg quiche recipe is for you!

With a buttery crust and creamy, eggless filling, this delicious quiche will satisfy even those that aren't plant-based. Don't believe us? Try it out yourself!

This recipe is for anyone who wants a delicious, hearty dish that's also cruelty-free and cholesterol-free. This vegan quiche is made with JUST Egg, onion, garlic, mushrooms, kale, green chile, vegan cheese, seasonings, and nutritional yeast, so it's packed with flavor.

Give this quiche a try and see for yourself how amazing it tastes!

This southwest-style vegan quiche was inspired by my Vegan Southwestern Tofu Scramble, and it pairs well with air fryer breakfast potatoes.

If you can't buy JUST Egg where you live, please take a look at my other breakfast and brunch recipes. I don't have a substitution for this product since that would be an entirely different recipe.

These are the ingredients you need to make this delicious vegan quiche:

Here are a few notes on some of the ingredients:

See the recipe card for the exact quantities of the ingredients.

How to make this JUST Egg Quiche

First, you're going to blind bake (or par-bake) the crust. This means you partially bake it for a short time period with pie weights or dried beans to weigh the crust down, to keep it from puffing up. Then you let it cool slightly, make the filling, prepare the JUST egg mixture, combine everything, and bake.

I recommend blind baking the crust to ensure it won't be soggy after you bake the quiche. However, if you don't want to bake the crust first, it will be fine; the crust likely won't be as crisp.

Allow this JUST egg quiche to cool for 10 to 15 minutes before slicing and serving. Top with fresh herbs, such as oregano. You can enjoy this quiche warm or at room temperature.

Feel free to vary the recipe to suit your needs:

Store the JUST egg quiche after it has cooled, covered, in the refrigerator for two to three days. You can place leftover slices in an airtight container.

Reheat: If you are going to enjoy it the next day, you can put foil over the pie dish and refrigerate it. To reheat, preheat the oven to 350°F. Let it warm up on the counter for 30 minutes first and heat for 20 minutes until warmed through.

I do not recommend freezing.

To save time, you can prepare the crust and par-bake (blind bake) it the day before.

If you make this recipe, please be sure to leave a comment and a rating ★★★★★ below. I love to see your amazing creations on Instagram, make sure to tag me @resplendentkitchen and #resplendentkitchenrecipes. To get more ideas follow me on Facebook and Pinterest. 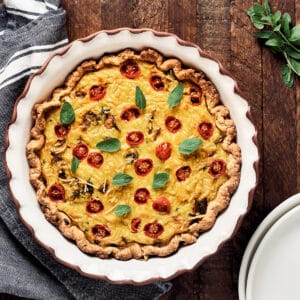 You can prepare the crust and par-bake (blind bake) it the day before to save time. If you skip blind baking the crust, it may not be as crisp. Quiche can be served either warm or cold. After the quiche has cooled, refrigerate in an airtight container for up to 3 days.

Hi, I'm Emily! I love to share my passion for tasty and nourishing plant-based food. You'll find seasonal vegan recipes here with the occasional indulgence. I hope to inspire you to try something new and eat more plants along the way!